New Physics/ SURe eliminates all mysteries,  inconsistencies and open questions of Physics.

Unsolved Problems of Cosmology and General Relativity            according to Wikipedia (copied): 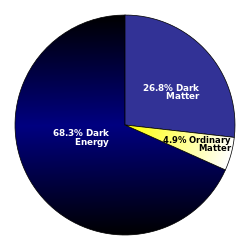 Estimated distribution of dark matter and dark energy in the universe

There is no reasoning why there should be a cosmic inflation. There is no valid physical mechanism for this. It violates many scientific principles.Generation of universe would not be possible in a small space.

The observed homogeinity of the universe can exclusively be explained by generation of equal density of matter all over a constant volume of the universe.

Origin and future of the universe

Origin is nothing and future is nothing or a homogeneous distribution of neutrinos with equal energy (except limit).

The universe has a constant but unknown size. The limit consists on condensed neutrinos (=matter of black holes).

Is a biased observation. There is no antimatter in universe.

There is no cosmological constant and there  is no zero point. Particles are everywhere (including vacuum) and always have enegy which is spin energy plus vibration energy.

refers to omnipresent neutrinos, which is explained "here"

does not exist, which is explained "here".

does not exist and has never been observed.

reveals that CMB is equivalent to omnipresent neutrinos.

Shape of the universe

has to be spheric because of the  homogeinity of universe.